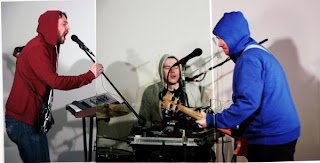 Not Squares could well be everyone's new favourite band of 2010, such is the strength of their new single "Asylum". This Irish trio will release their debut album in May through Dublin based independent label Richter Collective. Having extensively toured the UK festival circuit last year, most notably playing Reading & Leeds as well as Latitude, Not Squares are now ready to unleash their music to the masses via digital and physical outlets.
"Asylum" is one of those tracks that although seeming simple, musically speaking, it just works really well. Like "On A Rope" by Rocket From The Crypt, or "My Sharona" by The Knack, it is a track which captures your imagination and you can't help get caught up with the catchy beat and sparse vocals. The song makes you want to move, whether that's a head nod, foot tap, or indeed full on body movement as you can see in the video for the track.
It will be interesting to see how Not Squares deal with a full length record, but for now enjoy this brilliant single!
Not Squares /// Richter Collective /// MP3: Not Squares - Asylum
MP3's Not Squares Single Reviews