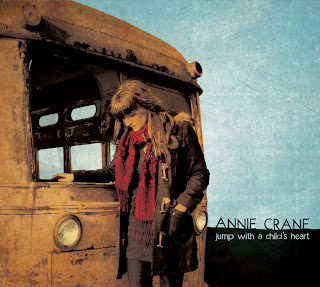 New York City based singer songwriter Annie Crane has a new single out in the shape of 'Copenhagen Heart', which is taken from her forthcoming album 'Jump With A Child's Heart'. It's a song about being lonely and homesick, with Crane explaining that during her time on tour she felt "self-conscious and like a fool and therefore homesick and missing my man".
It's an incredibly powerful song with tugs at the heartstrings, demonstrating not only the strength of Crane's songwriting ability, but also the great range and depth that her voice possesses. Which is rather ironic considering that she lost her voice for 3 months during 2008 and was told by doctors that she wasn't 'singing right'. Her response to that diagnosis - "it was total horse shit". (yeah, nice!). It might be slightly dangerous to do so but there's seemingly a lot of similarities to be drawn between this track and Laura Marling's new one 'Sophia'. Feel free to discuss that...
The album 'Jump With A Child's Heart' will be released on October 4th through Constant Clip Records, meanwhile check out the video for 'Copenhagen Heart' below. // Annie Crane